The Ghosts of War-torn Lovers 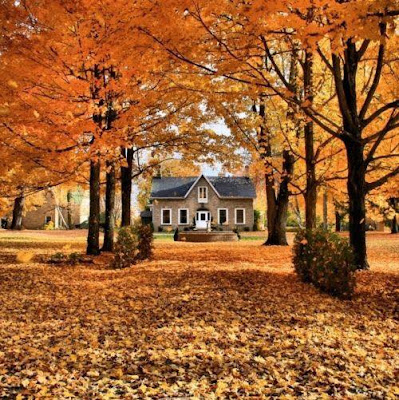 War loomed on the horizon. They both knew it was coming, they just hoped that it wouldn't happen so soon. He received his letter telling him when to report for duty on a brilliant October day. They had two weeks to get things in order and spend as much time as they could together before he had to leave.

Standing at the end of the lane, they embraced each other for what they both hoped wasn't the last time.

She promised him she would wait for him forever. He promised her he would come home, even if it took him forever. She clung to him with tears in her eyes, knowing that this could be the last time she held him. His embrace was just as tight, as he wondered if he really would make it back to his wife and unborn child.

She slowly loosened her grip and stared at his beloved face. He gently caressed the slight mound that was their growing child, his gaze sweeping the autumn landscape, the leaf lined lane and his family home. "I will love you for eternity," she whispered. His reply was just as ragged, "I will love you even longer."

He wiped a lone tear from her cheek, knowing that she would show nothing but strength to the world. She was glad that she wasn't a sobbing disaster as he turned and walked away. He would never know how hard it was for her to let him go. She would never know how much he wanted to sweep her up and leave it all behind. He told her he would come home in fall, just like when he left, that way she'd know when to watch for him.

The letters came frequently during the first year. She filled hers with news of their son and all of the things happening around town. He told her about the people he met and things he saw in the city he was in. But then he was sent further away and they started coming less and less frequently. The last letter she received was three years after he left, and he had been promoted to a Major.

She never forgot her promise, she'd start watching for him at the beginning of October. Then one day she saw a lone figure walking down the lane. Her heart stuttered, because it wasn't him, she just knew it wasn't. And she was right; their son, now five, came to stand beside her as they watched a man in uniform come closer and closer.

In a toneless voice, he delivered news that no woman wants to hear, "Ma'am," he said, "I'm sorry to report that your husband has been listed as dead. I'm sorry for your loss." With those words, he turned and left, never knowing the wreck he left behind.

She pulled herself together and lived her life for her son. She never remarried, and when her son was courting a young lady from town, she insisted that he build her a small cabin behind the main house. When he married and had a family, she moved her belongings into her new home and lived there for many years. And every October, she kept her vigil for the man that held her heart. She had promised him and she wouldn't break it.

She was a spry ninety-five when she passed away in her sleep. Her grand-children and great grandchildren had filled her life with happiness and laughter, only occasionally would they see the hint of sorrow in her eyes. They knew the reason why, even if they didn't talk about it.

Several generations were born and raised in the family home, and it's still in the family today. But they all say the same thing, every October, if you're in the right place at the right time, you'll catch a ghostly glimmer standing outside looking down the lane.

She never gave up her autumn watch, she knew he would come home to her eventually. Then one October, when the leaves started falling earlier than usual, as she was silently standing watch, she saw a young man coming towards her. She knew in her heart of hearts that he had finally come home and raced to meet him. They met in the middle of the leaf strewn lane and embraced as if they would never let the other one go.

She told him, "I waited for you!" He replied, "I came home!" Hand in hand, they turned and disappeared into the morning mists.
Email ThisBlogThis!Share to TwitterShare to FacebookShare to Pinterest
Newer Post Older Post Home