Tiptoe past the pumpkin

by Stephen Thompson
(and yes, you may read it to the tune of 'Tiptoe through the Tulips ... I did.) 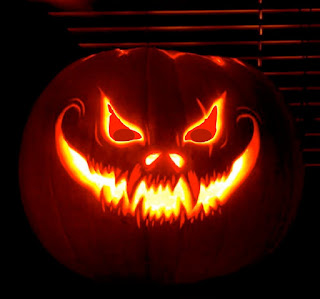 Tiptoe through the doorway
Very softly that is where they may be
Waiting in the hallway for me.

Oh, tiptoe from your safe room
With the window where the red Sun's dying
No use waiting here 'till it's too dark to see.

Tiptoe past the closed doors
In the darkened silence that is where they may be
So tiptoe don't try running you see.

Tiptoe down the stairway
Don't look back they may be creeping
But don't fall or they'll get you for sure.

Tiptoe through the sitting room
With the pumpkin with the evil red eyes
Is it one of them waiting for you.

Tiptoe through the kitchen
With the sharp knives and the darkened windows
Carefully,  still the pantry to pass.

Run now to the back door and slam it open
And you're at the bonfire your family around you
No more tiptoeing in the darkness for you.