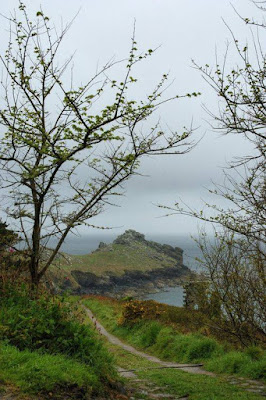 [We put out a 'call for caption' on this photo, Below is the answer to that call]

Steadily, silently, the sea had chewed at the coast, swallowing stones and tasty rocks. At last even the castle had been abandoned. The Sea had swallowed its very bones, leaving only a stone doorway standing to testify to its former glory.

The rocky promontory was built of sterner stuff and valiantly resisted all the onslaughts on its rocky shores. There it rests, the victor for all to see.
Email ThisBlogThis!Share to TwitterShare to FacebookShare to Pinterest
Newer Post Older Post Home